I am back from Oneida, NY, where on Saturday, May 19th, I was lucky enough to experience the Collinwood Inn with Ron Kolek and Karin Ruck of the New England Ghost Project, and Anne Kerrigan of East Bridgewater’s Most Haunted. 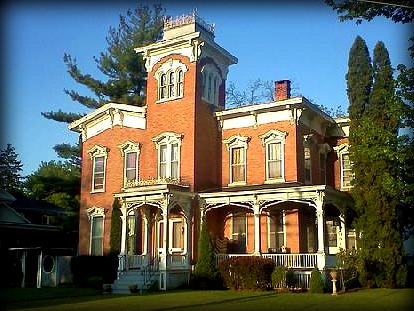 Also known as the Farnam Mansion, The Collinwood is an gorgeous B&B with a Dark Shadows theme.  Our hosts, owners Brian and Gerri Gray were warm, friendly and welcoming.  We were all in awe of the beautiful antiques and the meticulous details of the ceiling medallions and trimmings that Brian had worked so hard restoring to make this mansion truly shine.

When we arrived the spirit energy of the house made an impression as I walked across the threshold.  High levels of energy encountered on the first floor were in the dining room, the parlor and in the master bedroom.

I had images of doctors bags and stethoscopes as I entered the hallway.  Brian said that 3 doctors had each owned the building at one time.  The dining room introduced me to female energy and a picture of my mother in law in my head. I asked Brian if there was a Shirley or a May associated with the house, as this was my mother in law’s name. He confirmed that there was indeed a Shirley associated with the house and that she had a “bowl of boobies” as she called them, in a bowl placed at the very window where I was standing.

We were escorted upstairs to our rooms. The energy changed as we ascended the level.  I was aware of lung issues in the upstairs hallway.  Ron’s room was the Angelique Room, which was the room at the end of the hallway at the front of the house on the right, I had incredible head pain and dizziness. His masculine feeling room was equipped with a large jacuzzi. (He was very happy about that.)

Anne was in the Quentin room.  Red walls and a red fainting couch, perfect for “The Blonde Bombshell” to stay in.  I didn’t pick up much energy as we took photos of Anne stretched out as if she had fainted on the tufted antique.

Our facebook friend and “Ghost Chronicles-The Next Generation” chat room aquaintance, Cat and her husband Raf came all the way from Canada to be with us for our ghost hunt.  The were in the Barnabas room. I think that the lung issue I was feeling originated from this room, as it is at the top of the stairs.

Karin and I were in the Josette bedroom directly across the hall from Ron.  As we entered our bedroom I felt no energy what-so-ever.  A good night’s sleep was assured for us!

The rest of the guests arrived and the house turned dark with the setting of the sun.  To kick off  the investigation, we started in the basement.  There were high levels of EMF in the large room of the basement where we started our investigation. There was a male energy present.

Ron took out the Shack Hack, which is a radio which has been altered so that constantly scans the radio stations at a rapid pace and is unable to stop on any.  This is supposed to enable a spirit to pull any of the millions of words being spoken on the airwaves, and use them to communicate through the device.

The name Georgie was broadcast from the radio and as Ron asked questions, people’s EMF meters would respond.  Some of the beeps seemed to directly coincide with questions asked, and some we found to be associated with the electircal wires that ran across the ceiling.

We moved to the other side of the basement to a long sort of corridor.  I felt a female energy at the end in the corner.  As I connected I could see that she was an older woman, with gray hair and some sort of cotton, snap down the front housecoat.

Ron obviously was not completely on board with what I was saying and wanted to leave the area. He changed his mind about going upstairs when he saw a candelabra.  He decided to try to an experiment to make contact with spirit.

Karin had some divining rods and Ron lit the candles in the candelabra.  He was asking questions and through yes and no questions it was confirmed that there was indeed an older female spirit present.

I knew that the female wasn’t a wife of a former owner the house, so using my logical brain, I thought maybe she could be attached to one of the antiques being stored in the basement.  I asked Ron to ask if she was attached to the chair or the trunk, and he showed his annoyance by raising his voice with his answer of “No she’s not!” and suggesting to the guests that I didn’t know what I was talking about, when I was just trying to make sense of the energy by asking questions.

During this divining rod session of communication, this photo was captured by  Gerri, clearly showing and ectoplasmic mist forming at Karin’s left shoulder. 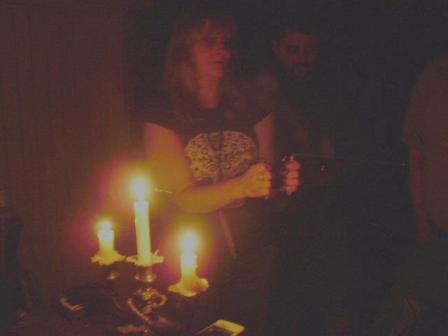 Hmmmmm, was I just babbling nonsense?   WHATEVER!  Ron is lucky I am such a nice person.   I let it go.

I had an image of butterflies pinned behind glass in a display case and was getting masculine energy from the room itself.  I also felt as if the room had been used for viewings after a death.  Gerri confirmed that it was once a gentlemen’s smoking room, and after the investigation, Karin informed me that she discovered that one of the doctors that lived there was a botanist and kept collections of plant samples, which would go hand in hand with natural displays.

We asked for a sign of the spirit’s presence, and it was again the woman from the basement.  When we asked the room went darker than it already was.  I realized that the streetlight had gone out.  Karin asked our spirit that if she had anything to do with the streetlight, to give us antoher sign.  The streetlight turned back on.  She then asked if our spirit could do it again, and the streetlight next to the original one went out.  Coincedence??

As the evening went on the activity seemed to wane.  At the end of the evening, after Gerri and Brian’s séance, we moved to the parlor once more to communicate with spirit by using a glass upon a table.

As we were conversing with a new female spirit, I felt a strong male presence entering.  All of a sudden all of the EMF meters that had been left on, in the middle of the séance table, in the room directly across the hallway from us, began to go off at full blast.  Anne took her video camera over to document it.  They continued to bellow for more than a couple minutes, and when we broke the communication off at the table with the female and closing the circle, without acknowledging the male spirit energy, the EMF meters fell silent.

It was a great night!

Thank you, Gerri and Brian.  I appreciate your hospitality, and I honor our new friendship. xxoo

**Note**  It has come to my attention that the spirit woman in the basement WAS a wife of a former owner.

This is why it is so important to know nothing on an investigation.  Brian had mentioned unintentionally that Farnam died, leaving his wife Sarah.  My logical brain dismissed that the spirit in the basement would be Farnam’s wife, because he was married to Sarah.  Elizabeth was Farnam’s first wife who died in the mansion.  This is how Ron knew I was going down the wrong path.

This is knowlege that Ron must have had prior to investigating.  Now that the pieces are fitting together, it makes total sense why he would try to stop me .

I believe it was a woman who lived in the house alone for a while.  I believe the spirit of the older woman in the basement who I saw to be Shirley.  Her snap down the front housecoat reminded me of one my own grandmother would wear, so the time period for the spirit woman would be late 1970’s early 80’s.

He let it go.  It is a good thing he is such a nice person.