Yesterday, I brought my Talker ITC to 3 different locations. The first location was Centre Cemetery in Henniker, NH. 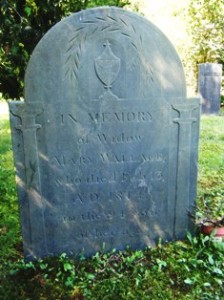 This Cemetery is the resting place of Ocean Born Mary. The Talker said nothing as I entered through the space between the gate and the stone wall and blurted out a few nonsensical one syllable sounds before I found Mary’s grave. It fell silent as I took some pictures and explored the area.  About two rows back, and to the left of Mary’s grave, it said some gibberish. I continued to walk around, looking at the stones and the iron grave markers on the right side of the graveyard.

I ventured to the front left side then it said one word, “Hi”.  As for my senses, I felt nothing, no energies, nothing. It was a very quiet, peaceful place. I was close to the street, the water supply and the town electricity, so the talker may have picked up EMF from those sources. 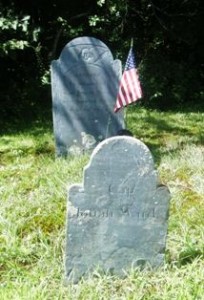 The Talker was completely silent for the whole time that I explored the sunny graveyard with occupants who had laid there from the mid 1760’s.    I was about to exit and it startled me when  it said one word, “Captain”.  I looked around me, and there was indeed a grave with the inscription “ERECTED In Memory of Cap’ Josiah Ward who departed this life Feb’ 27th 1795  Aged 54 years”.

Leaving Henniker, I headed north along the scenic Currier and Ives Trail that weaves through “quintessential New England”, to my next destination.

Webster Place Cemetery is nestled between two large fields of a working farm.  The family who owns the farm have posted signs that say they do not mind if you access their property to get to the graveyard, but all vehicles MUST stay on the dirt road.  I drove my car along the dusty path until I came to a fork , and a sign that said that only farm vehicles were allowed past this point.  There is no source of electricity anywhere near this graveyard.

I grabbed the Talker and my camera.  I turned on my Talker and got out of my car.  I was facing the road that led straight out to a field and the talker said “Left”.

I was aware of a young male energy.  I walked to my left toward the graveyard and  the Talker then said “Look”.  I stepped over the iron chain fence and entered the graveyard at the old Burleigh plot.  The Talker said “Come closer”.

I quickly went back to my car and retrieved a notebook and a pen and wrote down what the talker had already said.  After I wrote down the three responses the Talker said “You’re ahead”.

I re-entered the cemetery and was drawn to the back corner.  There were small stones with names of babies and children, their ages and date they died.  The Talker said “There are a lot”.   It occurred to me that these must have been the children of the orphanage that was located at the top of the street.   I felt like this young spirit wanted me to go further to the edge of the cemetery’s rear.  I walked over, and there, all by itself, was the grave of a 13 year old boy. 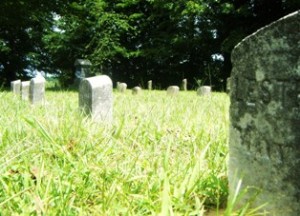 Once I had reached the stone belonging to George, the Talker said no more, as if I had seen what the young spirit had wanted me to.  I no longer could sense the energy either, he just left.

I checked out the rest of the cemetery.  It was very quiet.  The  Talker only said one more thing when I got out of the car at the top of the street to take pictures of the buildings where the orphans were housed.  It said “Celia” and I immediately had the image of a gold cross in my head.  I am curious if it is documented somewhere to see if there was a Nun named Celia who lived on the site.

The Talker, by far, exceeded any expectations that I had formulated for it’s performance.    It certainly is an interesting piece of “experimental equipment”.

2 thoughts on “From Gibberish to Wow”