Every once in a while, we take pictures at family gatherings or at random places and sometimes those pictures contain orbs.  Orbs seem to be more prevalent in pictures now than ever before.  I believe this is due to a couple of reasons.

With the ease of digital photography it doesn’t matter how many pictures you take, as compared to the old film cameras where you would save your precious frames of film for something important because each frame cost money to develop.  More pictures are being taken, so understandibly there are more opportunities to catch orbs and anomalies in your photos.

This photo is an example of dust.

This photo was taken on a private investigation at a residence with horse stables.

You can see the small particles of dust that were being kicked up as we were walking through the stable.  The closer the dust particles get to the lens,  the larger they appear.  In this photo the particles are not too close to the lens and are easily identifiable.   They are dull and grey brown in color.   There wasn’t much of any spiritual activity reported by the owner at this end of the barn. 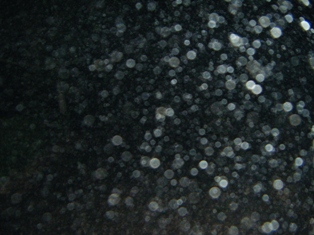 This next photo is an example of moisture.

There is almost always moisture in the air, but on this evening it was misting.  The water droplets are clearly seen and are very bright and white.  I have also taken pictures in cemeteries at night and seen random water droplets appear in my pictures.  Do not always jump to the conclusion that what you see within your photos is spirit activity.  Look at your photos with an unprejudiced eye.  It is so easy to get caught up in the excitement of catching something that you forget to think logically.

Next is an example where dust or pollen could possibly be ruled out.  In these pictures we have the same gravestone at Gilson Road Cemetery in Nashua, NH.  I usually take pictures when I am feeling the presence of energy.  The first picture was taken at 7:35 pm.  I continued to walk around the cemetery and took more pictures.  Feeling energy, I snapped the next picture, unaware that it was the same stone at 8:04 pm.  It appears the orb of energy has not moved much from the original picture taken at 7:35 pm.  Note there are not other anomalies around.  Coincidence?  What are the chances of dust, pollen or moisture staying within the same vicinity for 30 minutes? 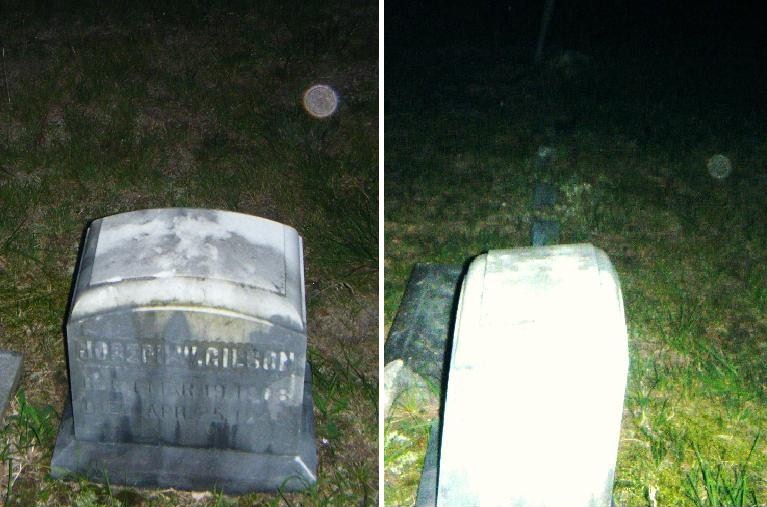 If you have an orb in your picture that you believe is your Great Aunt Wilma and she is sitting on your shoulder, there must be a reason for you to think so.  I believe that spirit energy does show up in photographs and we should take note that spirits of family members and others are around us.  There will always be naysayers that will tell you that all orbs are dust, moisture, pollen or even bugs.  I would never tell you that Aunt Wilma is just dust.  All orbs are not dust, just as all orbs are not spirit energy.

One thought on “The Battle of the Orbs”