Here is an interesting photo that I haven’t posted because I had submitted the article to an online magazine. Unfortunately, the magazine hasn’t been able to launch because of technical issues. It has been a few years now, so I am posting it here.

On October 8, 2012, my sister, my brother in law and two of their friends went for a hike on Mt. Shaw in the Ossipee Mountain Range of New Hampshire. When they reached a good spot to take a break, they stopped for a snack and a drink. My sister reached into her bag and grabbed her camera. She took some photos of her friends and the scenery and then they proceeded on their way.

When they got to the top of the mountain it was overcast and chilly with a light rain falling. My sister grabbed her camera once more and took more pictures. Nothing seemed out of the ordinary while they were on their hike, but when my sister got home and checked out what was on her camera from their day, she noticed this odd photo and immediately sent it to me. 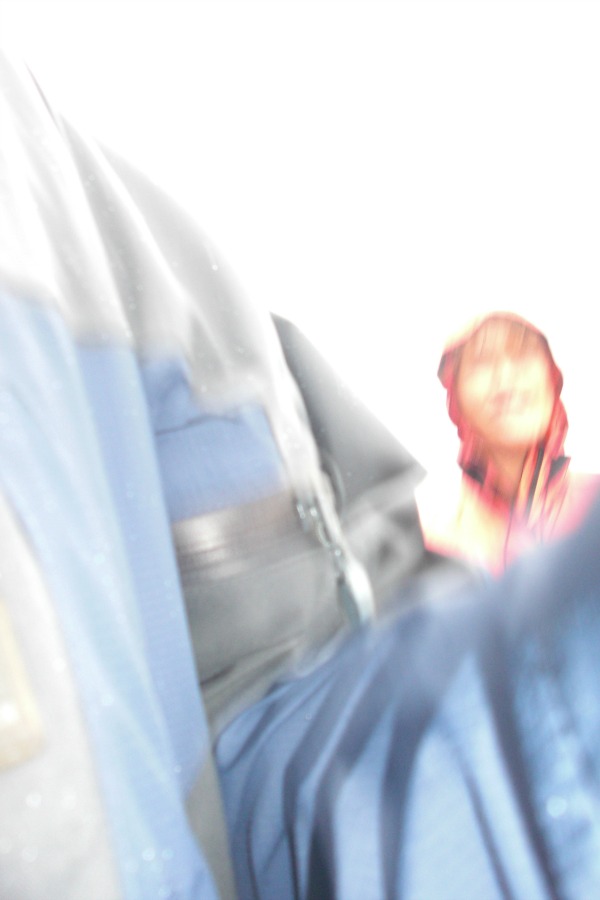 She believes when she grabbed her camera out of her bag, she must have pressed the shutter button, because she does not remember taking this picture. To the left is her friend’s jacket. You can see his chest and his arm that has a zippered pocket on the sleeve. His arm is bent, and you can see the little droplets of rain on his coat.

What is interesting, is the person that is standing beyond him, in the crook of his arm, was not a member of their foursome. Not one person was wearing a red jacket or even resembles the person in this picture. There were no other people around them on the trail when they stopped or at the summit.
It almost looks as if the person is wearing some sort of veil over their face. You can definitely make out a nose, neck, chin, mouth and brow and cheek bones, but there is a void where the eyes should be. I can’t tell if her eyes are closed or if they are missing.
Who is this mystery person and what is she doing on Mt. Shaw?