I love getting packages in the mail, especially whe they contain things that intrigue me.

I purchased a Talker ITC from Bill Chappell, the creator of other talking ghost hunting tools such as the Ovilus and the Paranormal Puck. When it arrived I immediately put in the 3 required AAA batteries and turned it on. The little red light slowly and methodically blinked at me as if to say “What were you expecting from me, a conversation right off the bat?” I chuckled to myself and decided to check it out. 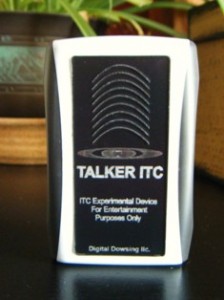 The Talker works by detecting fluxuations in the Electromagnetic fields surrounding the unit.  It is said that EMF fluxuations happen when spirit activity is present.  The spirits, in turn, can speak through the device by using the sounds that are stored within the Talker’s memory bank and manipulate the energy fluctuations into audible speech.

Armed with this information, I decided to see what the Talker would do if I purposefully changed the EMF levels near the unit.  I went straight to my microwave and it uttered it’s first sounds.  I was wondering if it was a foreign language.  It spat out unidentifiable gibberish in long strains of unmatched syllables.  I brought the unit over to my television, and again it seemed that it was speaking in tongues.

I brought it outside and it was silent.  I decided to take it to a nearby cemetery and left it on as I walked.  It said not one word. Real, or made up ones for that matter.

As I approached the right front side of the cemetery, I was drawn to the area which was closest to the street, on the far front left side.   I entered the small cemetery from the early 1800’s and walked at a slow pace.  I realized I wasn’t alone, I felt a male energy.

I kept walking and the Talker said what I thought was “Merrill”.  I said “Okay, I will look for a gravestone with the name Merrill.”  I continued on my way toward the left side of the cemetery and The Talker said “Tomb”.  I had just passed the only tomb in the cemetery and I was on the back side of it.  I said “Okay, I will go back to the tomb.” and walked around to get to the front side.  As I came to the front I noticed one small stone placed on the front right side.  The name on that stone was Elbridge G Varrell. 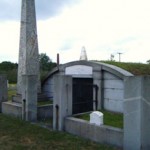 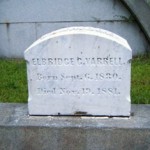 When The Talker speaks, it speaks in a robotic voice.  Merrill and Varrell sound so much alike, they could easily be mistaken, one for the other.

All in all, for my first outing with the Talker ITC, I was impressed.  I believe there is some validity to the claims that Bill Chappell makes about his device.  It did say a couple other words, but I missed what they were.  You have to have your ear at the ready at all times with this device, because you never know when the Talker will speak.  I recommend running a digital voice recorder during any and all sessions with the Talker ITC.  That way you will not miss out on words that are said when you are not ready to  listen.

I look forward to bringing it on upcoming investigations to see what it has to say.  More importantly, I want to see if it says things that are as relevant as they were today.