Last evening I had the pleasure to experience something new.  I travelled to Circles of Wisdom in Andover, MA and encountered a pre-Columbian Mesoamerican ancient artifact that was unearthed in Monte Alban, Mexico.

At the request of  his guardian, Mario Bojorquez,  I removed my shoes to show respect as I entered the back room where the sold out throng of curious attendees had gathered.  As soon as I crossed the threshold into the room, the energy from this beautifully carved piece of clear quartz crystal took over. 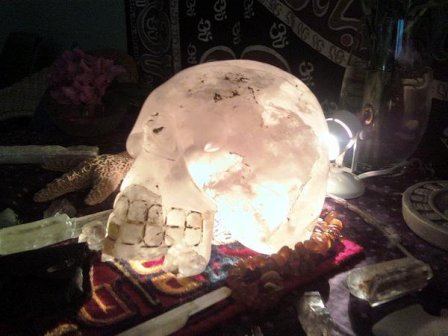 I was amazed at the amount of energy I could feel, particularly in my chest.  I also noticed sensation my neck, into my jaw and in the front of my head.  I took my seat in the chair furthest away and in the back corner of the room.

Although my back was against the wall, I was aware of a male presence behind me.  He was big, and he was watching. 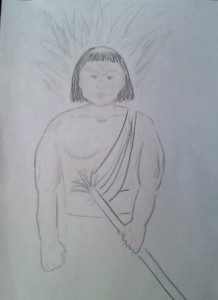 It was as if the wall wasn’t there, and he was looking over the crowd while being directly connected with the perfectly carved skull.  I have done a quick sketch of him (right).  He was brown skinned and had black hair.  He had full lips and had something draped over his shoulder and across his chest.  He also had something dark and feathery behind his head and was carrying a staff of some sort.  I believe him to be another guardian of the skull, along with Mario.

There was also spirit movement within the room throughout the 3 hour talk, in which Mario explained his journey with the “glass head” that he inherited from his grandparents.

Mario explained that Pancho is all about communication, that quartz crystal is the component that is found within all of our communication devices, such as cell phones and computers.  Crystal stores information and is what computer chips are made of.  One minute chip can store tons of data, photographs, songs or whatever you store on you computer. That is just a tiny, tiny chip.  Imagine the information that could be stored in a large chunk of quartz crystal.  That is what Pancho is.  Stored information from an extremely advanced people from thousands of years ago.

He has surfaced at a time when Mother Earth has begun to shift.  The legend of the 13 Crystals Skulls says that when mankind is on the brink of destruction, the 13 skulls will appear and give humanity the information it needs to survive.

As I am sitting here, recalling my encounter with Pancho, the Ancient Crystal Skull, I am experiencing the same feeling in my chest cavity that I experienced last night.   I believe I met Pancho for a reason.  I am thankful that I was able to experience his energy and learn something new.

2 thoughts on “When One Meets Pancho”