Recently my friends Fiona Broome and Sean Paradis and I travelled to the Old North Cemetery in Concord, NH. We were very interested in the cemetery within a cemetery, where the 14th President of the United States, Franklin Pierce is buried.

As we walked around the fenced in area, we noticed some strange instances that didn’t add up. One of these was that some graves were turned at an angle, every one of the stones that were moved were all facing the exact same way.  We thought that was odd. 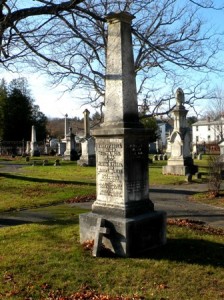 As we continued to search the cemetery for things that looked out of place, I noticed a monument with it’s top knocked off.  The cross that was once perched beautifully atop the tall grave marker was now leaning against the monument in an inverted position.

I said to Fiona and Sean “Oh, I have to fix that” and proceeded to go over to the monument and uprighted the cross.

As I made my way back to where I was standing just a moment before, I noticed something had been placed in my path.

I looked down and to my amazement, there was a feather. 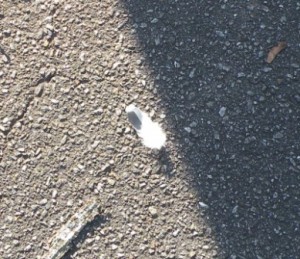 It was not there as I made my way over to fix the Christian symbol, and there was no other feather to be seen within the whole entire graveyard.

I bent down to pick it up. I said “Oh look a present from the Angels!” and then said “You’re welcome. Thank you for the gift.”

Sean was amazed, as was I.   I believe that someone was showing their appreciation for my good deed.