I videotaped an experiment that I conducted in my basement about Pendulum work, and if the person dowsing is actually manipulating it or not.

In the video, I have hung my pendulum on a copper pipe that has been drained for the winter.  It is the pipe that feeds the garden hose.  There is no running water or heat associated with this pipe.  As you can see in the video, I have taken the human hand out of the equation, thereby making it impossible to manipulate the pendulum conciously or subconsiously. 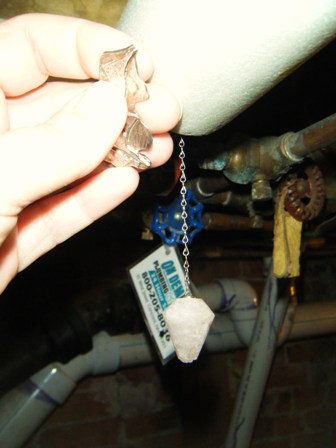 I switched to a fully charged hot water pipe.  The pipe was warm to the touch.  I attached the pendulum with the big silver piece for me to hold around the copper and left it there until it was perfectly still.  Suprisingly, when I resumed the experiment, the results were the same.   As I was asking the yes and no questions, the yes answers were consistently counter clockwise, and the no answers were back and forth.   Another thing that was consistent between all of the pipes, was the velocity, or strength of the pendulum movement.  I asked if any energy was being received from the pipes and the answer was no.  I asked if the energy was coming through me and the answer was yes.

One thing I noticed right away during the experiment was that when I am holding the pendulum in my hand it moves with much more force and certainty.  When I was only attached by my fingertips, it moved in a much weaker fashion.  Is this due to the energy having to travel a greater distance?   Like with the old fashioned telephone service, long distance and transatlantic calls were faint and you had a hard time connecting.  Maybe this is true to this energy experiment as well.

What are your thoughts?  I am always interested in your ideas!

One thought on “Dowsing Without Manipulation”